Socializing your Golden Retriever is very important. As you may already know, all dog breeds behave different in front of strangers, with some dogs choosing to ignore people altogether. They may choose to glance at someone, then go on to pay no attention to him. On the other hand, some dogs are the total opposite and love to meet everyone they can. These types of dogs love attention, and will take any attention they can get.

Some Golden Retrievers are happy with those they have come to know in their own family, or those they have selected to be friends. Others on the other hand, may feel comfortable just around those of the same sex. Most Golden’s like children, although there are a few rare cases in which certain 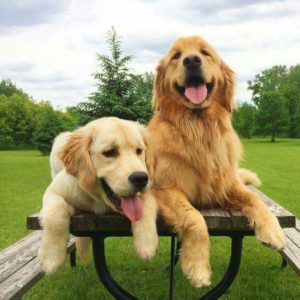 types of Golden Retrievers like adults but not children. This is extremely rare, and is normally due to the way they were bred or raised.

When your puppy is between the ages of 8 weeks and 8 months, socializing him is extremely important. During this time, you should always do everything you can to ensure that your Golden Retriever meets other people. Although he may be shy at first and not have much interaction, he will eventually come around. You will need to be patient with him during these times, as he will need quite a bit of reassurance from you.

Your dog’s parents also contribute to socialization. If the parents of your Golden Retriever were good with people and other dogs, the gene could very well be passed on to your dog. On the other hand, if the parents were shy or aggressive dogs, those genes could be passed on as well. Pups inherit the traits of their parents ,which is why it is very important to make sure that the dogs being bred are compatible with each other – and share a passive temperament.

If your puppy was separated from his mother before he reached the age of seven weeks, he won’t learn many of the social signals taught to him by his mom and his siblings. Golden Retriever pups that are brought to a new home earlier than seven weeks will normally tend to end up nippy or aggressive around people. Although they may be aggressive towards people, they may be shy or fearful around other dogs, as they lack the social skills needed to be themselves.

Sometimes, if a puppy was injured or frightened during his early years, he can end up with a state of trauma. This type of thing leaves a huge scar in the mind of a puppy, making it very hard for him to get past it. Most Golden Retriever pups that have been injured or frightened by an individual never get past it. They may end up fearing humans in general, or being very aggressive towards them when they feel frightened. When you take your puppy home for the first time, you should always make him feel welcomed, and never let anyone or anything harm him.

To better socialize your Golden Retriever, you should always make sure that he gets plenty of interaction with other people and other dogs in his breed. This way, your Golden will learn how to socialize at any early age. When he gets older in life, he will carry these skills with him. Golden Retrievers that are sheltered or not given the proper amount of interaction will turn out shy towards people and other dogs. With your Golden being your companion for life – you should always ensure that he gets the socialization he needs.