A mini Chihuahua is often the “runt of the litter.” These dogs are usually one to two pounds. They have currently become famous as a result of celebrities carrying them around in purses. But, you can not tell until a dog is 10 weeks old whether it is going to turn out to be a mini Chihuahua. 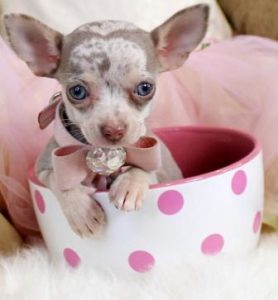 Don’t let a dog breeder fool you into thinking that a six week old puppy is going to turn into a mini Chihuahua. There are just too many variables at that point.

A mini Chihuahua usually is considered a short haired dog and often appears to have no hair. As you can imagine, the lack of hair combined with the small bone structure of the dog means that they don’t retain warmth well. That means that in the winter time, particularly in cold places, they need sweaters or coats to stay warm. You should also prepare a dog bed with blankets as necessary.

One of the reasons that the dog is susceptible to cold is because it was first found in Sunny Mexico. In fact, it is named after its native state, Chihuahua. The breed was developed from a larger indigenous Mexican dog crossed with the Chinese puppy that the Conquistidors brought with them from Spain.

A Mini Chihuahua is sensitive and harsh or inconsistent discipline is counterproductive. They are anxious to start with, and these activities and may enhance their natural anxiety.

A Mini Chihuahua can become spoiled unless they receive kind and consistent discipline. If they are having difficulty learning, this is especially true. By nature, a mini Chihuahua has a light, lithe body, so it can easily race out of sight before its owner is able to react.

A Mini Chihuahua is excellent for apartment living as they do not need as much space as larger breeds. You do need to walk and exercise them though. A mini Chihuahua will require that some of your living space becomes its own and not want you to intrude on it, which can be problematic in a small apartment.

A Mini Chihuahua is a friendly, companionable dog. Easy to train, they are especially good for first time dog owners. While you should brush them at least twice a week, otherwise they require very little grooming.

A Mini Chihuahuas is prone to having specific health problems due to its very small size. Some common problems include Tracheal collapse, Hypoglycemia, Bone and joint diseases, Obesity, Heart conditions, and Bladder Stones.

A mini Chihuahua can also be seriously injured if children or adults play rough with it. In fact, roughhousing with one of these dogs can break a miniature Chihuahua’s back. So, keep them away from children.